By Act of the Maryland Assembly in 1742, Charles Town was established as the first incorporated town in Cecil County. Charles Town is located in the Fifth Election District of Cecil County, Maryland, between the Susquehanna and North East Rivers, near Carpenter's Point. According to George Johnston's History of Cecil County, Maryland, published in 1881, the first permanent settlement in Cecil County was made in 1658 at Carpenter's Point. The farm was patented to William Carpenter on July 20, 1658, and consisted of 400 acres. It was named "Anna Catherine Neck" and was located near Principio Creek.

Charles Town was the name given in honor of the Fifth Lord Baron of Baltimore, Charles Calvert, Absolute Lord of the Provinces of Maryland. 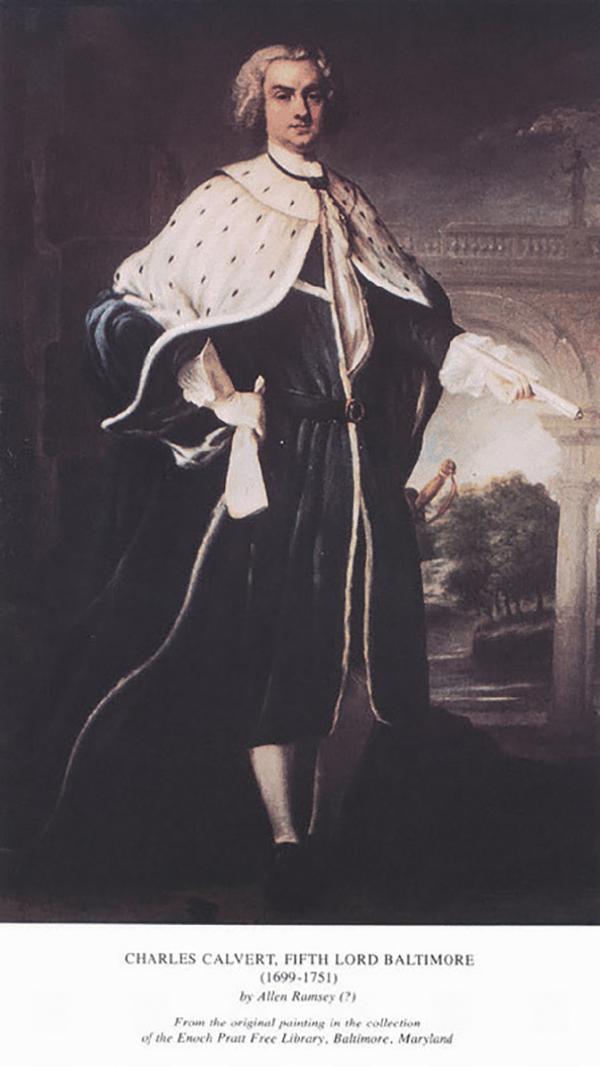 At the time of the town's incorporation, Cecil County was sparsely populated, and the Lord Proprietor had hopes that a port at the head of Chesapeake Bay would help trade through navigation in an area where no other town existed. The town was to be established according to the Act "at a place called Long Point on the west side of the North East River in Cecil County." The Act appointed seven town commissioners: Colonel Thomas Colvill; Captain Nicholas Hyland; Benjamin Pearce; William Alexander; Henry Baker; John Read; and Zebulon Hollingsworth.

The town plan was drawn per the Act, setting out 200 lots to be drawn by lottery and reserving several sites for public use. By law, each lot owner was required to build a house; the commissioners had the authority to approve the house. If the lot was not developed within three years, it was forfeited and sold to another. Town records show that, by chance, Maryland's then governor, Thomas Bladen (1698-1780), drew lot number 16, a prime corner lot with an unobstructed view of the North East River. Bladen Street is named in his honor.

Thomas Bladen was born in Maryland in 1698, the eldest son of William Bladen (1670-1718) and Anne, daughter of Garrett Van Swearingen and Mary Smith. He lived in England from at least 1712 until 1742 and later Annapolis from 1742 to 1747, when he was governor of Maryland. Thomas Bladen became governor of Maryland, no doubt, as a result of his marriage to Barbara Janssen on July 14, 1737. Barbara was the daughter of Sir Theodore Janssen (circa 1658-1748), and her sister, Mary Janssen, was married to Charles Calvert. Thomas Bladen was commissioned Governor of Maryland in April 1742. Lord Baltimore dismissed him from office in 1747 because he was "tactless and quarrelsome." 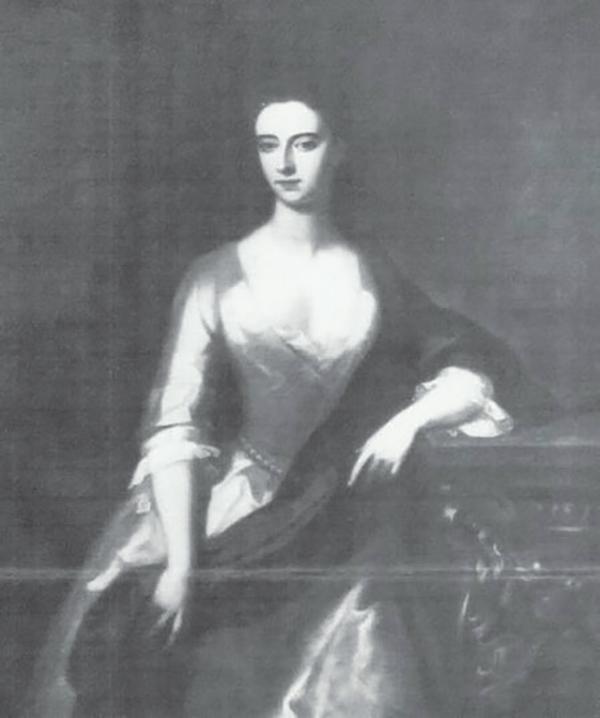 Louisa, Caroline, and Frederick Streets were named in honor of Charles Calvert's children. Ogle Street was named after Samuel Ogle (circa 1694-1752) and Tasker Lane was named to honor Benjamin Tasker Sr. (1690-1768). 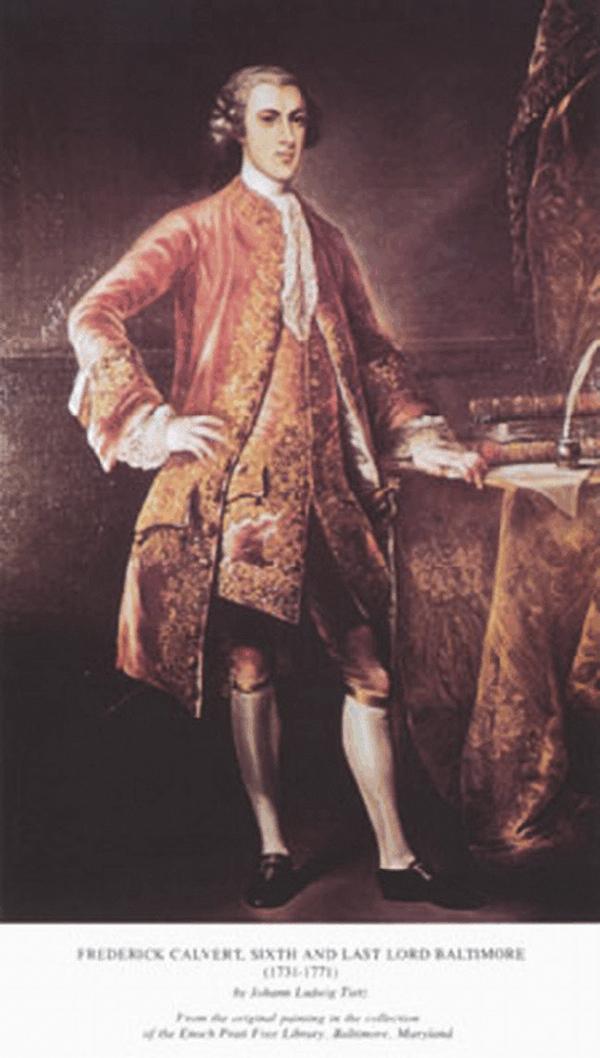 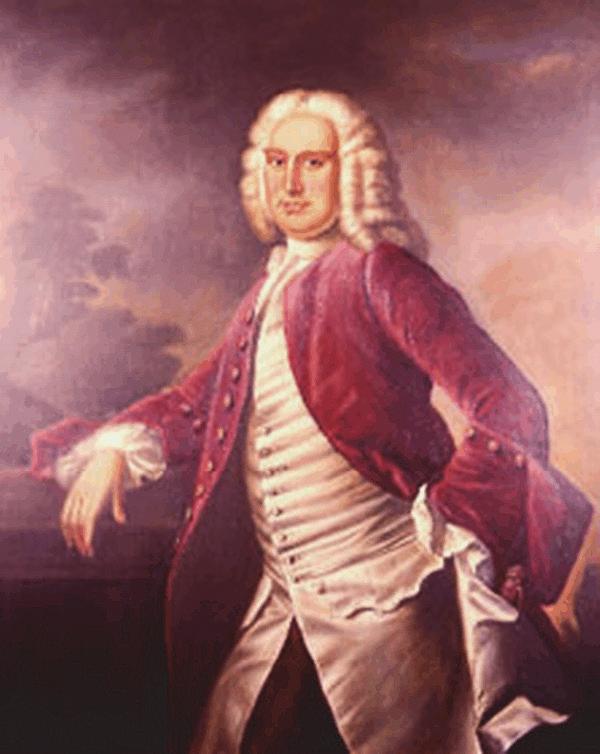 Governor Ogle is traditionally credited with introducing thoroughbred horse racing to North America. Although Governor Ogle never lived in or owned property in Charles Town, a street was named in his honor.

Since Charles Town was to be a port town, a town wharf was authorized by statute. One of the reserved lots on the plan of 1742 was the wharf lot, located just to the southwest of Lot 1. Each lot owner was required to pay twenty shillings to help with the costs of building the wharf. The wharf contained an inspecting house and a warehouse. The inspecting house was a one-story building, thirty feet square, with roof parts extending out for cover. The warehouse was a three-story building, 80 feet long, with massive walls: 36 inches thick on the first floor; 24 inches thick on the second floor; and 12 inches thick on the third. The only description of the wharf is found in the town minutes of 1755, when Benjamin Chew Jr. was hired to rebuild it. The wharf is described as 300 feet long and wide enough that three wagons could pass, and built of heavy log cribbing filled with stones. Charles Town was the only port on the North East River. Goods including tobacco, grain, and flour were among those shipped in and out of the port. Although neither the inspection house nor the warehouse remains, parts of the original wharf can be seen today at low tide. 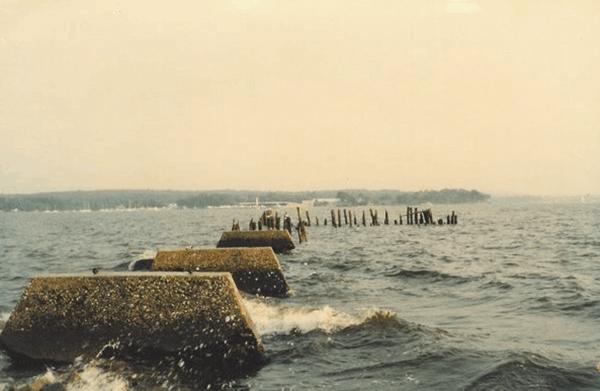 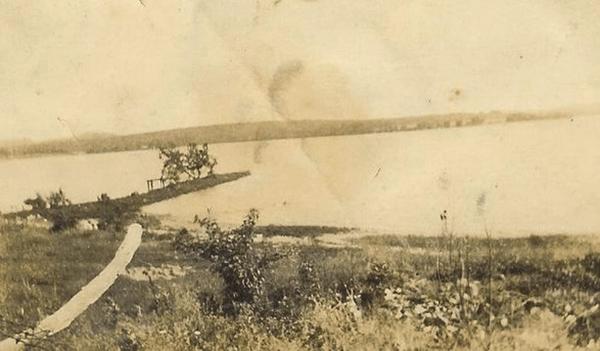 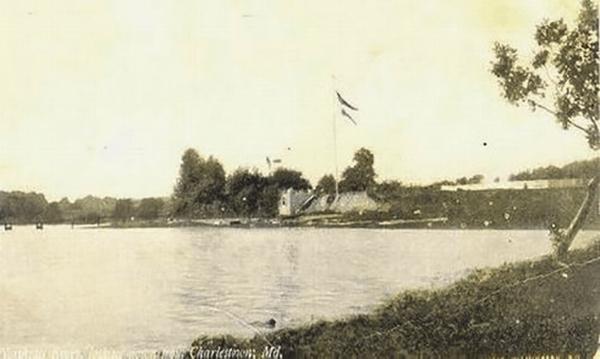 Other lots reserved for the public use included the Market Square, a courthouse, and a church. The Market Square was the site of the Charles Town fair, which was authorized by a supplementary Act of the Maryland Assembly, indicating that a town fair had been held in 1744. The Assembly thereafter authorized two fairs, on April 23 and October 18 of each year. Merchants came from Lancaster County, Philadelphia, and Baltimore. The Market Square in the earliest of times was the site of a large brick open-air market house, where stalls were rented to local merchants to sell their goods and wares. 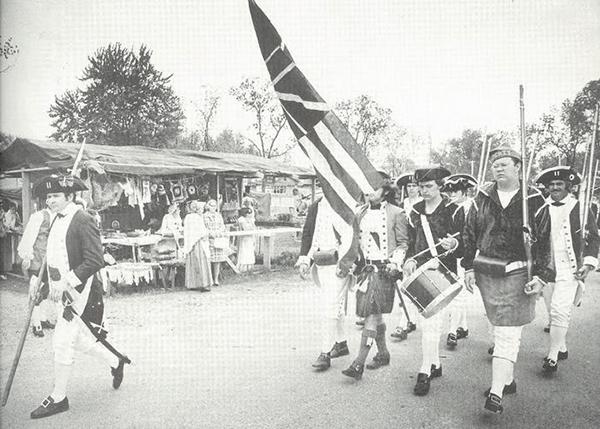 (Above, in 1974, Colonial Charlestown Commission hosted a Colonial Fair in celebration of Cecil County's 300th Anniversary. This photograph, published in the 1974/75 edition of "The Eastern Shore Heartland," depicts the re-enactment of the Third Regiment of the Maryland Line, lead by Charles Town's Lieutenant Colonel Nathaniel Ramsay, portrayed by Vernon Bryant, Sr., Charlestown, Maryland.) 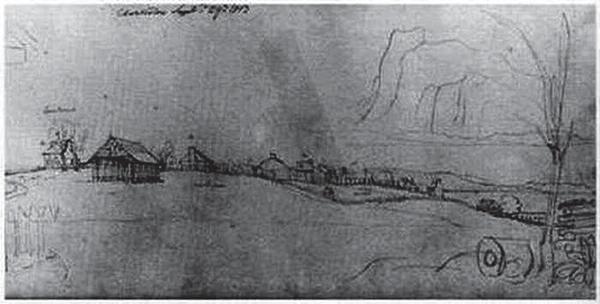 (Above, sketch of Charles Town by Benjamin Latrobe on September 29, 1813. Latrobe Sketchbook, XII-5, Maryland Historical Society. The Market House can be seen in this sketch, as well as other important properties, including those belonging to John Paca, father of the signer of the Declaration of Independence and later Governor William Paca; Francis Key, grandfather of Francis Scott Key; and Governor Thomas Bladen. Also depicted in the sketch include the respective homes of saddler John Smith; cooper David Davis; and carpenter Edward Tully. The oldest distillery in the United States, operated by Peacock Biggar, can also be seen in this sketch. The fairgrounds are also pictured.)

Although a courthouse was never erected in Charlestown, the town was the seat of justice, and early court records show that court was held in Charlestown from 1742 until 1787. From 1785 to 1787, court was held at the home of Alexander Hasson. A small stone jail for the use of the county was erected in Charles Town on the corners of Calvert and Caroline Streets in about 1783. In 1785, the county seat was moved from Charles Town to the Head of Elk (Elkton) because the county had become settled and the residents demanded a more central location for the seat of justice, one that could be reached without using ferries. In fact, the residents of Cecil County petitioned the General Assembly of Maryland in about 1883 to remove the jail and seat of justice to the Head of Elk. 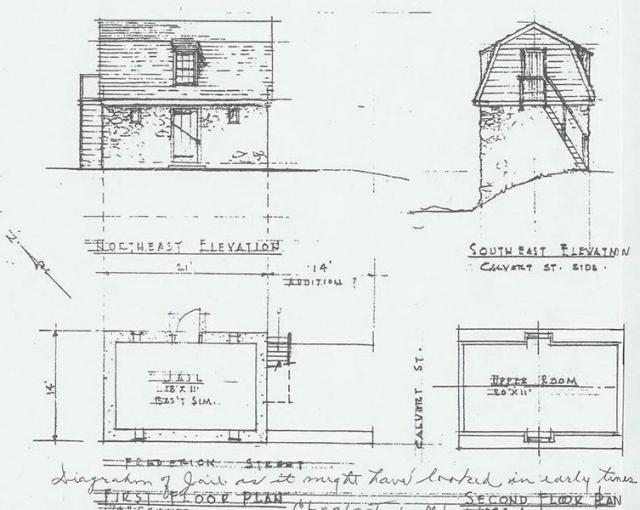 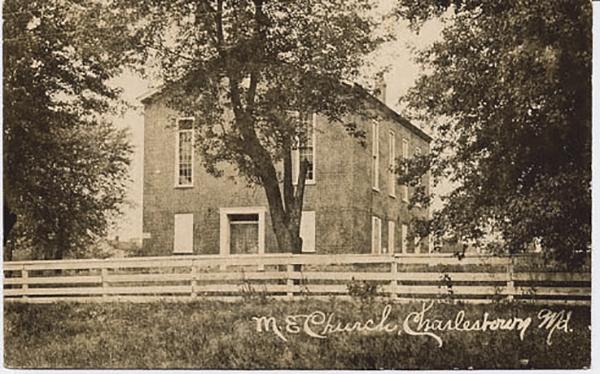 The public lot assigned for the town church was never used as such. The Methodists purchased Lot 64 from John White in 1826 and erected the first church in town, known as the First Methodist Church of Charlestown. The congregation continued to worship there until St. John's United Methodist Church, which remains today, was built in 1856 on Lot 45. Services were originally held in a large brick house where the Methodist parsonage is today. That house had belonged to the father of Francis Scott Key, who sold the property to Nathaniel Ramsay, a local Revolutionary War hero and personal friend of President George Washington. The brick home was burned in 1834. It is pictured in Benjamin Latrobe's 1813 Sketch of Charles Town. A graveyard is located in the church's property, which contains many markers dating to the early 1800s. At least two other graveyards are located in Charlestown near Lot 12, although no headstones remain today. It is said that many of the headstones located in this graveyard were stolen many years ago, to be used as door steps.

A careful review of the congregation's minutes shows that as late as 1823, the town was still calling itself "Charles Town." Interestingly, Baltimore, which was incorporated only a few years before Charles Town, was originally known as "Baltimore Town." Sometime between 1823 and 1850, the town became known as "Charlestown" while Baltimore lost the "Town" portion of its name altogether. 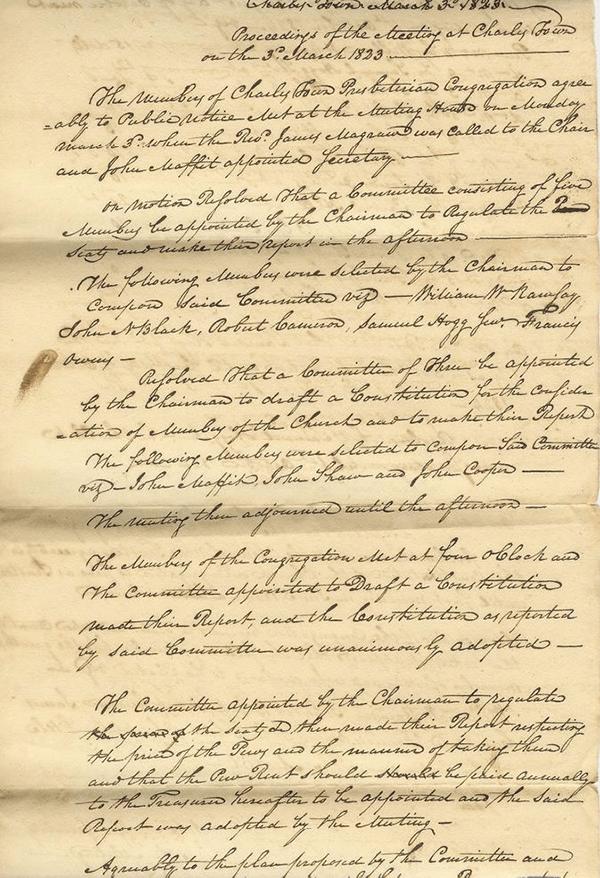 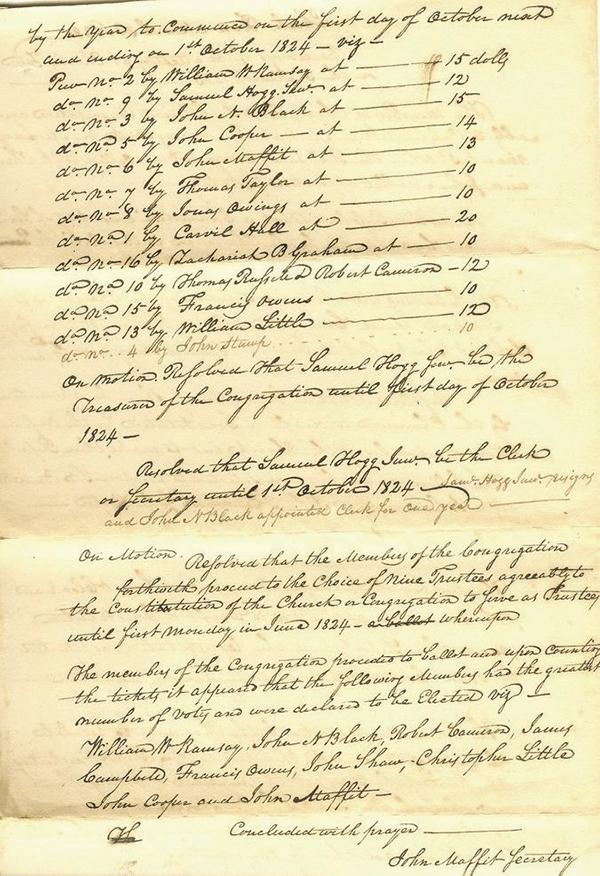