The Gunning Clubs of Charlestown 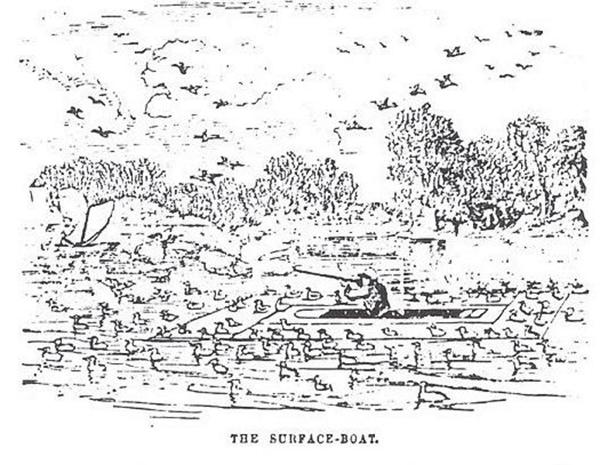 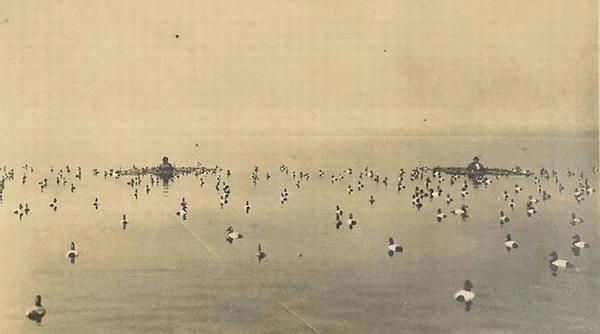 Located on Lot 10 in Charlestown, the Wellwood Club was originally a private hunting and fishing club called "Ye Olde Homestead." Its founders, who had unofficial ties to the Republican Party of Philadelphia, had honorable intentions, establishing one of the finest gunning clubs in the United States as "an organization of optimists and humanitarians in the broadest sense. Its purpose is to promote the happy' habit; to reduce the friction of life to a minimum and increase the pleasure of existence to the maximum; to discourage strife and promote good fellowship." 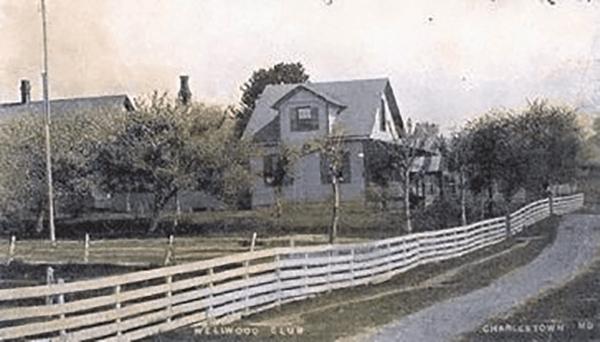 (This circa 1912 photograph of the Wellwood before renovation.)

In the 1920s the club undertook the renovation of the original building, by adding a second floor and expanding the building to the rear to accommodate its expanding membership roles and eventual transformation to a private country club. 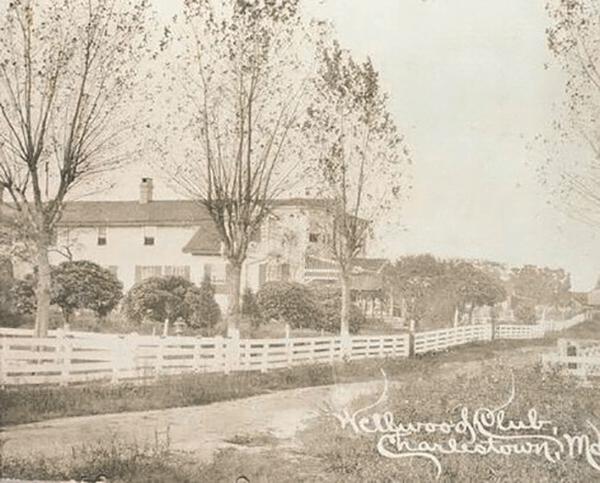 The Wellwood's members included businessmen and members of Philadelphia society, two of whom were Louis H. Eisenlohr (1860-1922) and Louis P. White, who on September 29, 1917, hosted a "Barbeque-Southern Style." 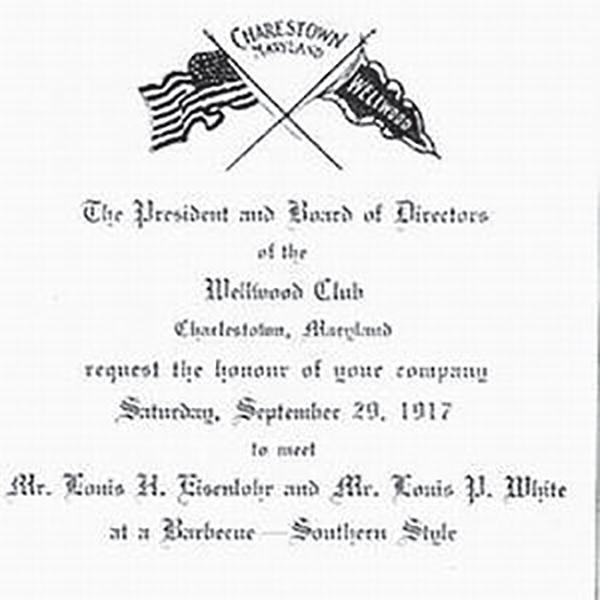 Mr. Eisenlohr was a regular at the Wellwood. He was a member of the Free Masons in Philadelphia, who in 1918 authored the book Memories from Philadelphia to Charlestown, Maryland via Nome, from which these two pages are copied. Mr. Eisenlohr began a cigar manufacturing business with his two brothers, Otto and Charles, in their native Philadelphia. Their product was the Cinco cigar. Over time, the company grew from a small room with six employees to twenty-one factories employing five hundred people, and in 1900 was the second-largest cigar manufacturing company in the country. 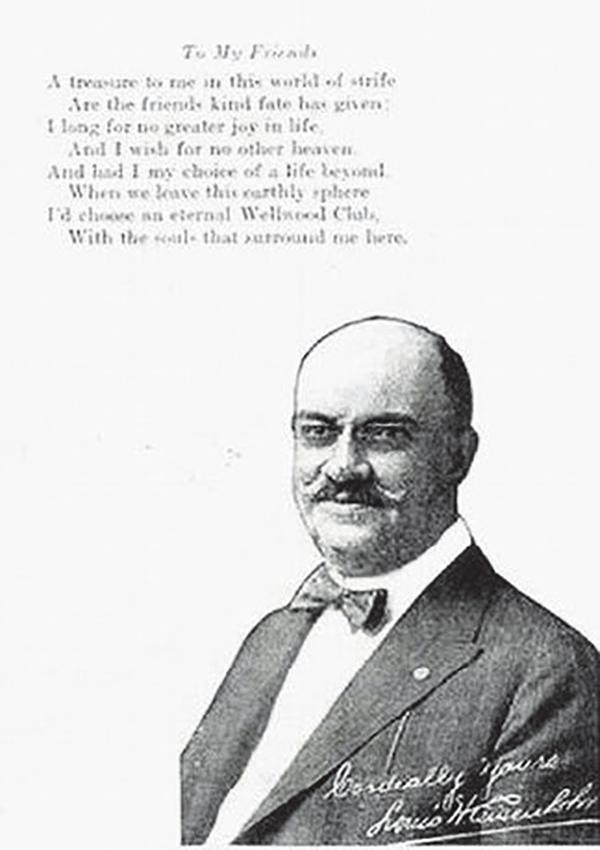 Louis Eisenlohr was always interested in the welfare of young people, most especially those who wanted to attend college. After his death, the Eisenlohr estate gave a significant gift to the Grand Lodge of Pennsylvania to build a home for girls at Elizabethtown, Pennsylvania. Today, there are two buildings at the Elizabethtown Masonic Village bearing his name. He was one of the most prominent yachtsmen on the Atlantic Coast and died on his yacht in 1922. 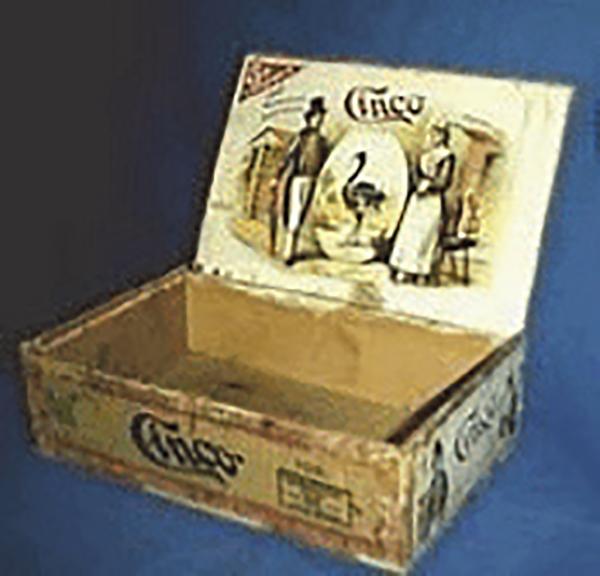 In the mid 1920s, the Wellwood Club became the Wellwood Country and Yacht Club, which included a nine-hole golf course, a duck pond, a swimming pool, and a three-story dormitory building called the "Cuba Inn" or "Cabana Inn."

On the second floor of the clubhouse are rooms named for each state that sent a letter to the club requesting that a room be named after that state so its representative would have a place to call home. 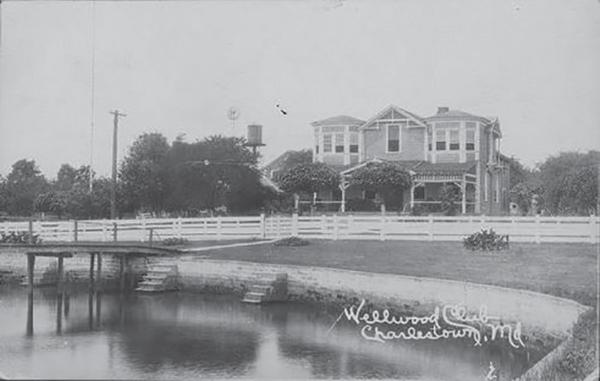 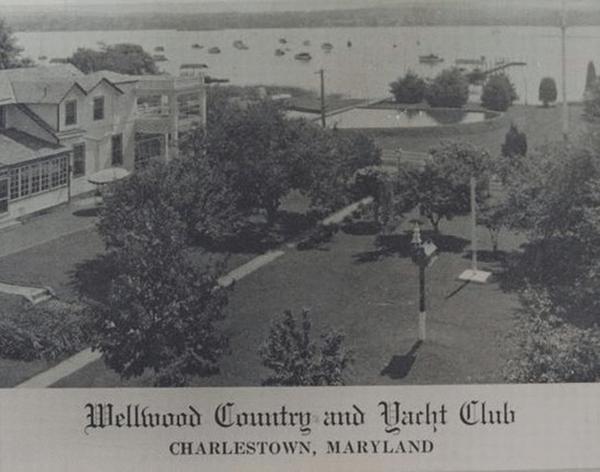 Fortunately, the Wellwood retains a circa 1950 photograph collection of the interior of the property, displayed here courtesy of its current owner, Larry Metz.

Members and distinguished guests of the Wellwood were greeted with a sign over the main entrance proclaiming "Who Crosseth This Threshold Is At Home." The grand entrance contains marble columns and moldings. 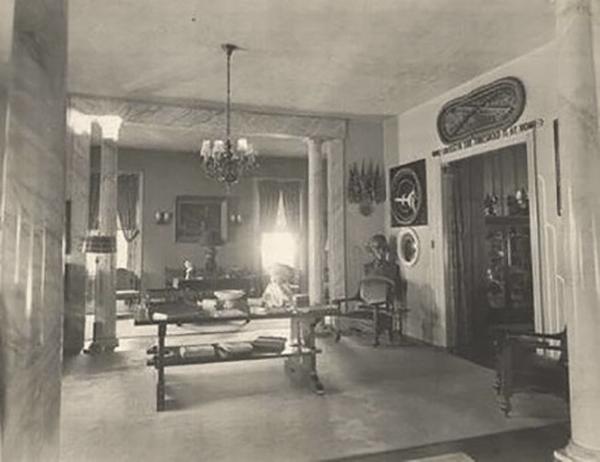 A lavish parlor with a large fireplace provided members and guests with a warm, relaxing room to discuss the day's hunt. Above the fireplace is a plaque that reads "This fire will warm your body, it will not warm your heart." 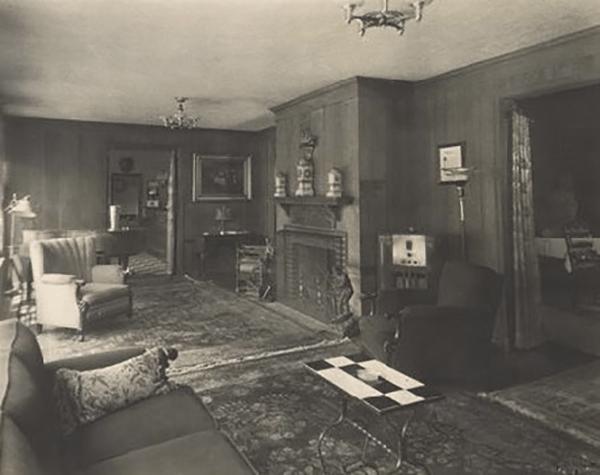 A formal dining room with white linen tablecloths was where members supped on fresh fish and Canvasback ducks, expected and delivered every night of the week.

For less formal times, the club contained a bar, where, for a long period of time, no women were allowed. The members of the Wellwood often used the bar area to play cards and canasta. 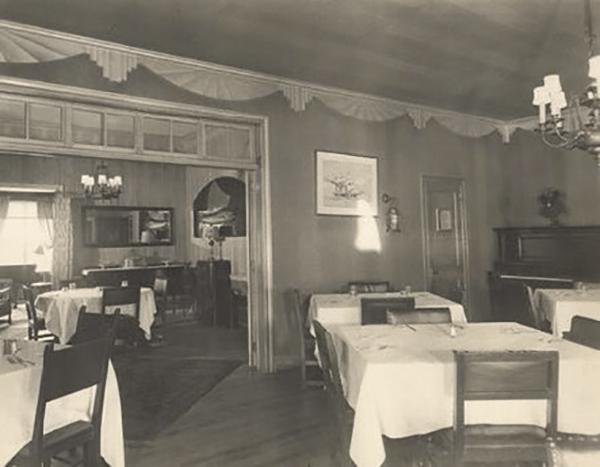 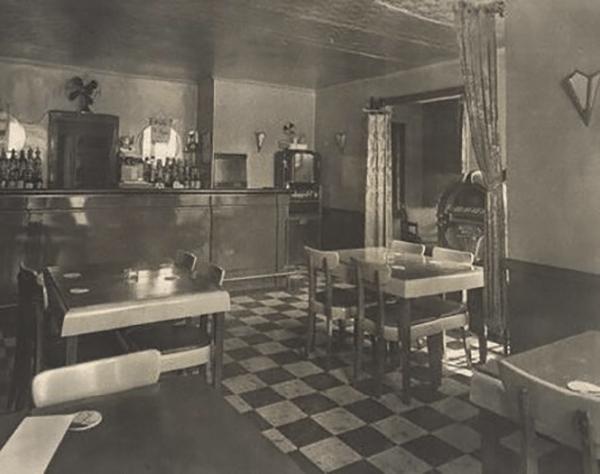 (The photograph above is but one of two formal dinning rooms at the Wellwood, and the photograph, left, shows the back bar.)

During its heyday as a world-class gunning club, the Wellwood hosted presidents, governors, and members of Congress on a regular basis. The club's popularity grew to such an extent that the renovations of the 1920s included the addition of the "Cuba Inn." Also known as the "Cabana Inn," the building served as a boardinghouse for out-of-town members and guests. Behind the inn were extra sleeping quarters. During the 1920s, a Model T bus was kept in the garage of the back building that was used to pick up and drop off gunners at the Charlestown rail station. 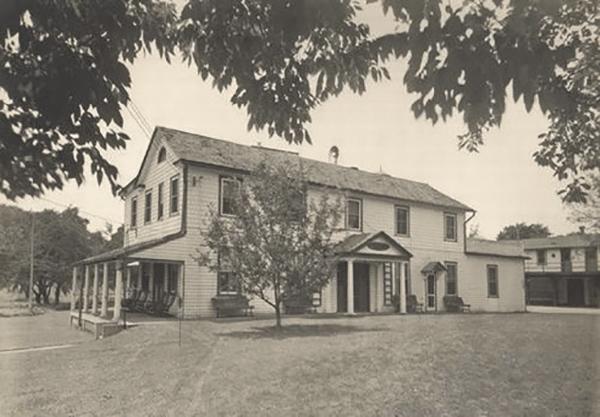 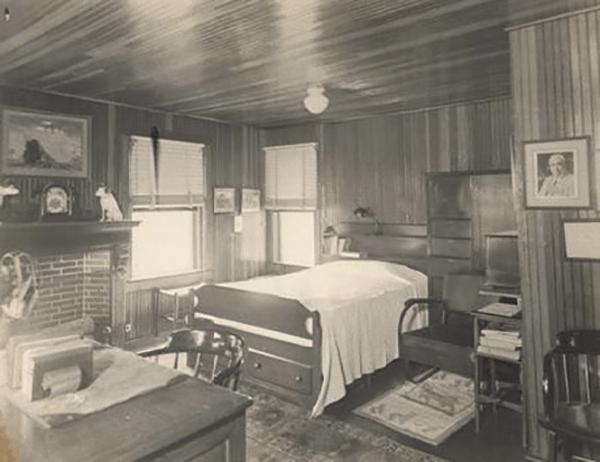 In addition to hosting the "sports" from neighboring Philadelphia and Baltimore, the Wellwood also played host to a major sporting event. On May 5, 1863, the Heavyweight Championship of America was fought at the Wellwood. Prizefights were illegal in those days; unable to secure a site in New York or Philadelphia, promoters took a train to Charlestown, where they set up a ring behind the club. Fans, including the mayor of New York, traveled by rail to watch "Street Fighting Man" Joe Colburn (1835-1890), pictured left, fight "Deck Hand Champion" Mike McCoole (1837-1886). Colburn, described as "an intelligent, crafty battler [who] was quick and agile; his footwork was good and he hit with two fast hands," was 5 feet 9 inches tall and weighed in at about 190 pounds. McCoole was 6 feet 2 inches tall, weighed in at about 200 pounds, and was described as "big and strong, but slow and clumsy." It was a bare-knuckle fight that lasted an extraordinarily long time, one hour and ten minutes, and went sixty-seven rounds. A round in those days was a knockdown. In the end, Colburn knocked out McCoole to become the Fifth Heavyweight Campion of America, also known as the "American Bare-Knuckle Champion." This fight is the only known major sporting event to take place in Charlestown in its 263-year history. 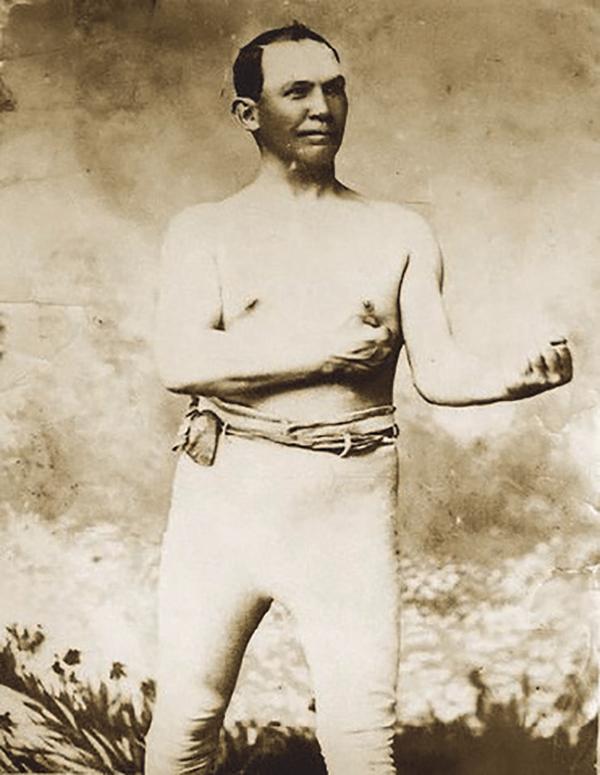 Charlestown, however, certainly has had its visits by distinguished personalities throughout its history. Presidents, governors, and members of Congress have stayed at the Wellwood. President Grover Cleveland, who often hunted the Susquehanna Flats, occasionally stayed at the Wellwood, and Presidents Calvin Coolidge and Theodore Roosevelt are also included on the club's guest lists. President Roosevelt made a gift of this carved wooden eagle on one such stay.

One of the most sporting of all the presidents was Grover Cleveland. President Cleveland enjoyed gunning for Canvasbacks on the Susquehanna Flats and the North East River, and stayed at the Wellwood while he was President. Although little is know about these hunting trips, it is known that the then President gunned over a special set of decoys made by an unknown carver on the North East River. Many speculate that the unknown carver was Charlestown resident, John B. Graham, but that has never been conclusively established. These decoys have become some of the most famous group of birds, called the "Cleveland Canvasbacks." 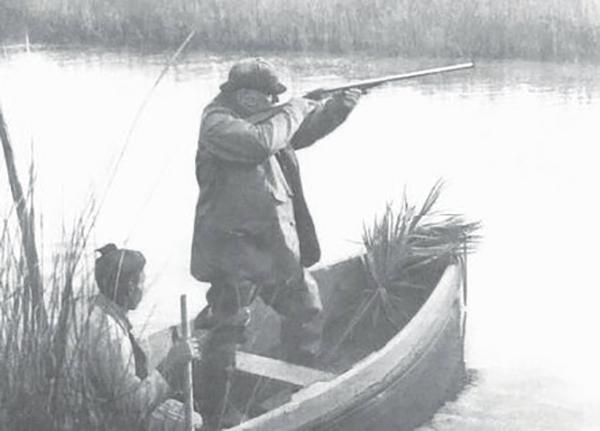 The "Cleveland Canvasback" first gained notoriety in Joel Barber's pioneering book on the art of decoys, Wildfowl Decoys, published in 1934 by Windward House, Inc. Mr. Barber was so impressed with this one bird that he had collected near Charlestown in Aiken, Cecil County, that he dedicated a full color plate, drawn by him, depicting the bird, shown right. 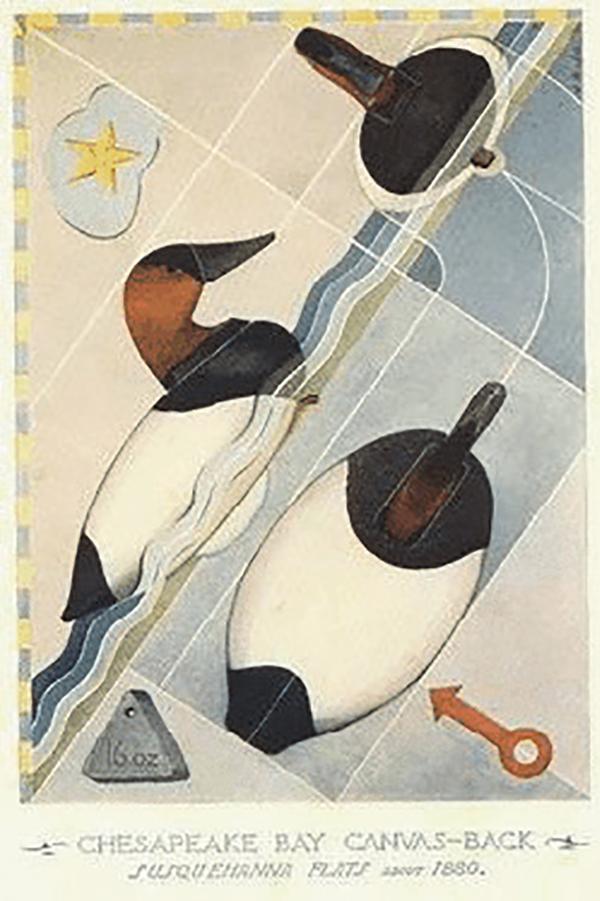 Apparently not just full size Canvasbacks were made, but so were Canvasback wingducks, as there are only two (2) known examples to exist. Additionally, the Cleveland rig contained Redheads. 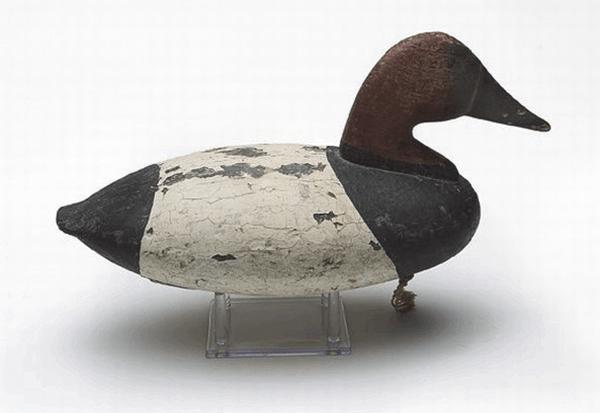 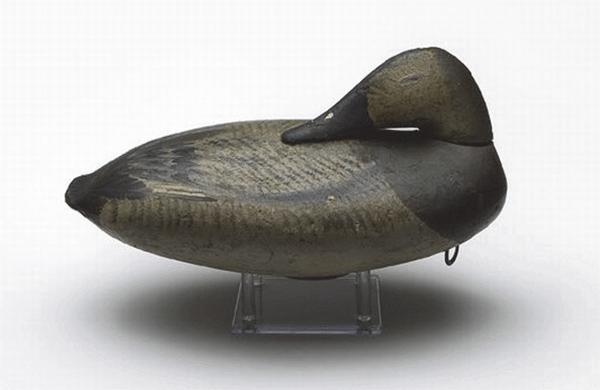 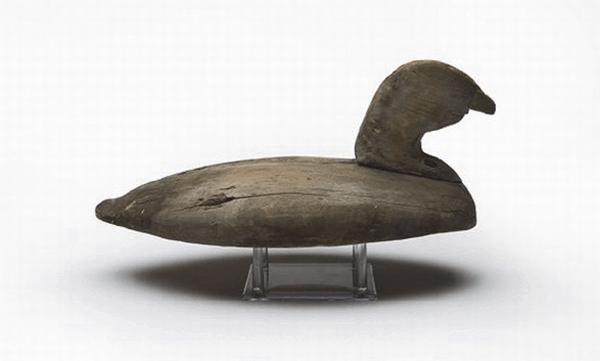