The year 1852 was a presidential election year in the United States, and on August 31 of that year, Winfield Scott Jackson was born in Charlestown, Maryland. He was named after General Winfield Scott, who ran unsuccessfully on the Whig ticket against Democrat Franklin Pierce.

Born the second son of John and Mary E. Jackson, his siblings included an older brother, James Henry, born in 1849; a sister, Eugenia, born in 1858; and a younger brother, John, born in 1860. At the age of twenty-seven Scott Jackson was living with his parents in their Charlestown home, working with his older brother as a farm hand at the George Washington Barnes Farm and Fishery at Carpenter's Point. Later, his duties at Carpenter's Point included carpentry, repairing boats for the Barnes brothers, who operated the fishery for some time after the death of their father, George Washington Barnes Sr., in May of 1880.

It was at Carpenter's Point where Scott Jackson met his contemporaries, Wash Barnes and Will Heverin, and together the three men began producing decoys for gunning the Susquehanna Flats. 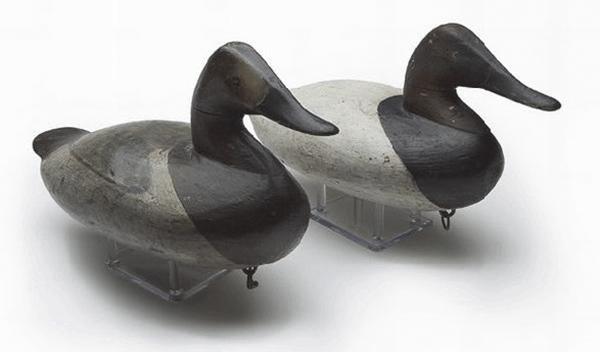 (Above, Canvasback pair, Scott Jackson, Charlestown, Maryland, circa 1915, from the Lew Pennock rig, and so branded.) 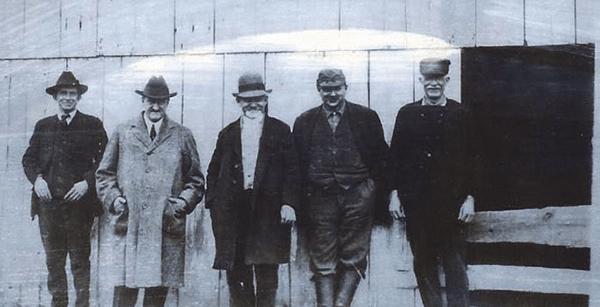 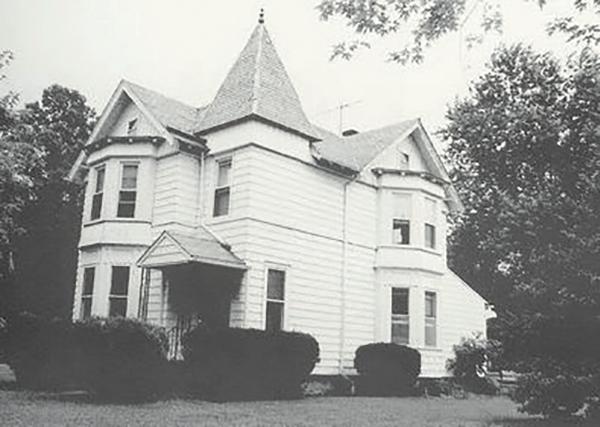 Scott Jackson was a skilled carpenter. In 1901, he built a large home on the corner of Bladen and Frederick Streets in Charlestown. As can be seen from the photograph of the home, Mr. Jackson had, by 1901, achieved some prosperity. Mr. Jackson's craftsmanship is evident in the refinement of the home's interior. According to the 1996 book At the Head of the Bay: A Cultural and Architectural History of Cecil County, Maryland, Mr. Jackson "displayed his artist's eye in the details of the house as shown in the interior door surrounds, which have five strings of delicate reeding in their centers. The reeding is echoed throughout the house on every possible flat surface: in the mantels that once framed heating stoves; in the bannister; in the solid panel that covers the step ends of the stair; and the window frames. All wood trim in the house was executed in chestnut, a further refinement."

The Jackson house is located at 704 Bladen Street. Mr. Heverin lived directly across Frederick Street, and according to Evan McKinney, the men often argued with each other on the appearance of a decoy. Both Mr. Jackson and Mr. Heverin carved decoys in their respective sheds behind their respective houses, less than 100 feet from one another. One can just imagine these gentlemen strolling across the dirt road from one another's backyards to needle the other on a particular form or paint pattern. Other neighbors included John B. Graham and Wally Algard, although by 1901 Mr. Graham was no longer making decoys. 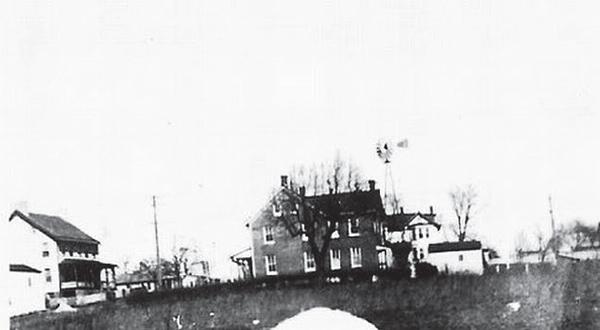 (Photograph above, circa 1905. The large white home at the far left was is the V. B. Algard Hotel, although by 1900 it was owned by the Gibson family. Behind that building, not in the picture, is the home of John B. Graham. The small white building to the right of the hotel is Mr. Graham's undertaking business and decoy workshop. The large brick building is the home of Will Heverin. Mr. Heverin's white decoy workshop shed is clearly visible. Behind the Heverin home is the home of Scott Jackson. His decoy workshop shed is just barely visible. Photograph courtesy of William Algard, Charlestown, and George Algard, Principio, Maryland.)

On April 7, 1915, Scott Jackson married Emily Elizabeth Barnes. Ms. Barnes, who was the younger sister of Wash Barnes, was born at Carpenter's Point on November 5, 1871. They had no children.

According to J. Cranford Henry, the grandson of Perry K. Barnes, Mr. Jackson, like the Barnes brothers, was a commercial fisherman and an avid hunter. He was also a professional guide. His clients were wealthy "sports" from Baltimore and Philadelphia, including Charlie Bayles and Morris Clothier (see page 114). Mr. Clothier was one of the founders of the Philadelphia-based clothing store chain Strawbridge-Clothier. They often gunned together with the Barnes brothers on the knoll off Carpenter's Point and at Perry K. Barnes' decoy house on the Charlestown waterfront, where the icehouse is still located. 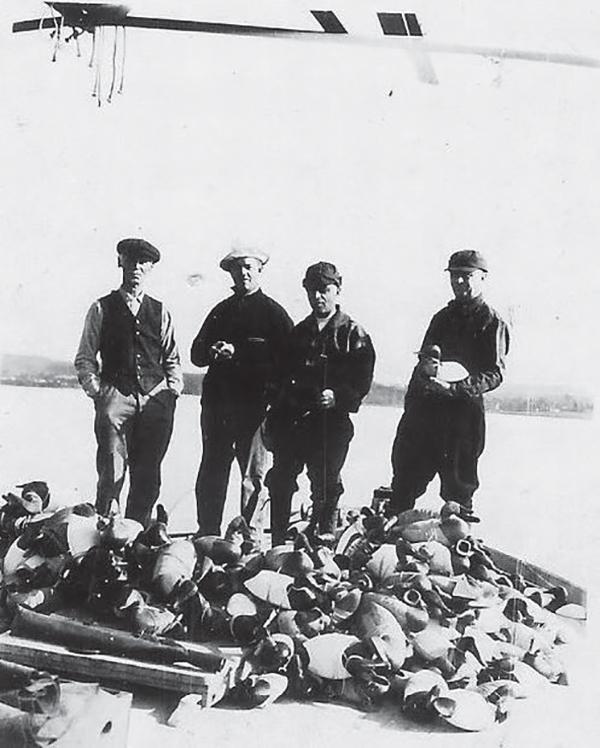 (This photograph was taken about 1915 on the bow of a large boat near the Barnes decoy house in Charlestown. It shows unknown clients of Scott Jackson returning from a morning of gunning the North East River. Photograph courtesy of J. Edgar McMullen, Charlestown, Maryland.)

In 1920, Governor Albert C. Ritchie (1876-1936) appointed Mr. Jackson a member of the special ducking police of Cecil County. Governor Ritchie was a member of the Wellwood Club and, no doubt, met Scott Jackson while gunning out of the club. The ducking police hold a special place in the gunning history of the Susquehanna Flats. By 1860, waterfowl hunting was regulated in Maryland by statute. The enforcement of these laws was left to local sheriffs. By legislation in 1872, gunning the Flats was regulated by time periods and a hunting license was required. A July 23, 2001 article written by Pat Melville in the Maryland State Archives' newsletter, The Archivist's Bulldog, reported that in Cecil County, Benjamin Dye was the first member of the "Board of Special Police." In 1880, the Maryland General Assembly gave the governor the authority to appoint the Board of Special Police, "to consist of four men, two each from Cecil and Harford Counties, for two-year terms." Mr. Jackson was one of the last members of the Board of Special Police, known as the special ducking police, and later abbreviated to "ducking police." In 1927, Maryland law established a Game Warden within the Conservation Commission. Although the governor continued to appoint members of the ducking police, they were more like modern-day game wardens, charged with enforcing all conservation, game, and fishing laws. The law authorizing the ducking police was repealed in 1941, as were the special provisions for gunning the Flats.

In about 1928, ten-year-old Bob Gibson, who was then living with his grandfather in the V. B. Algard Hotel, visited the Jackson house around Christmastime. He remembers the front room containing the magnificent miniature sinkbox rig that Mr. Jackson made to advertise his guide business. Mr. Gibson recalls that the display was quite large and included flying decoys hanging from the ceiling in addition to miniature gunning stools floating on a blue-painted surface surrounding a miniature gunner in a single box. Mr. Jackson routinely loaned the display to sporting goods stores in Baltimore each summer before the gunning season. The rig has long since been disassembled, but local collections contain fine examples of this valuable piece of Charlestown's decoy history.

Winfield Scott Jackson died at his home in Charlestown on January 6, 1929.He is buried in the graveyard at the Methodist Church, with his first wife and two of his children. On March 30, 1943, Mr. Jackson's second wife, Elizabeth Barnes Jackson, died and was buried at Angel Hill Cemetery in Havre de Grace with other members of the Barnes family.

A few Upper Bay collections include Canvasbacks branded "L PENNOCK." Lew Pennock lived at Greenbank Farm near Charlestown from the 1920s through the 1950s and gunned at Wild Duck Cove. Mr. Pennock owned an extensive rig of Canvasback, Redhead, and Blackhead decoys carved by Will Heverin and Scott Jackson. 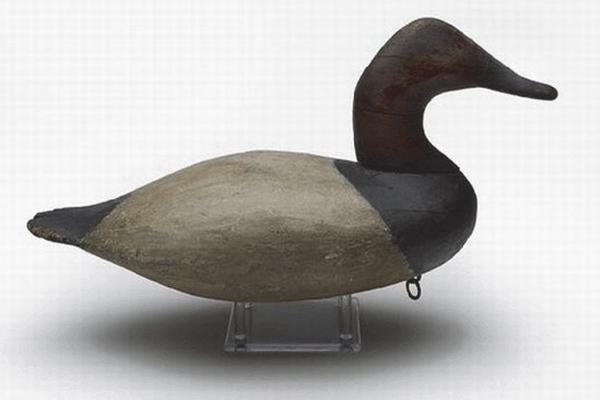 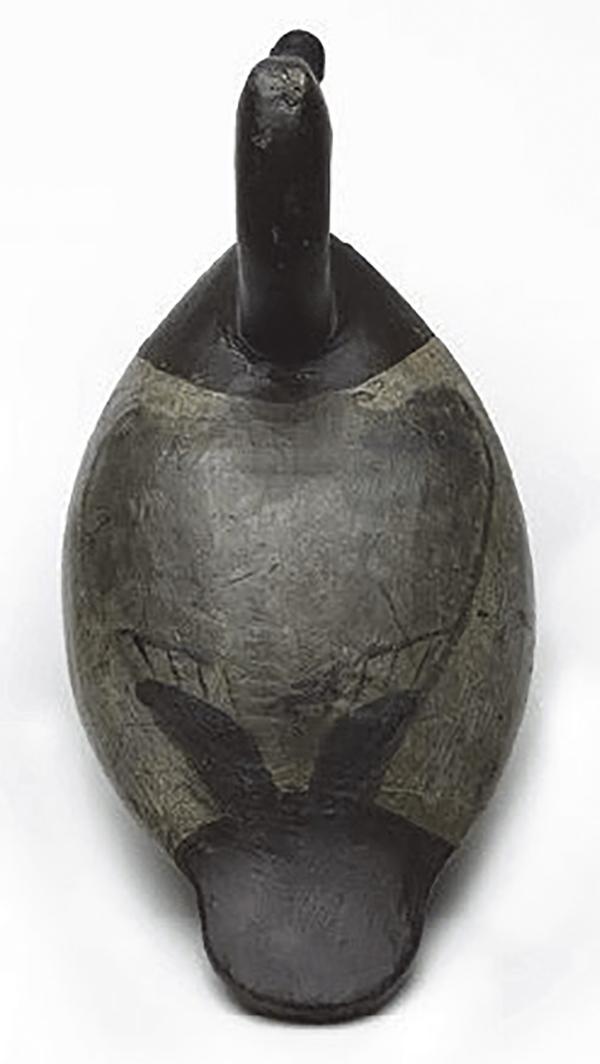 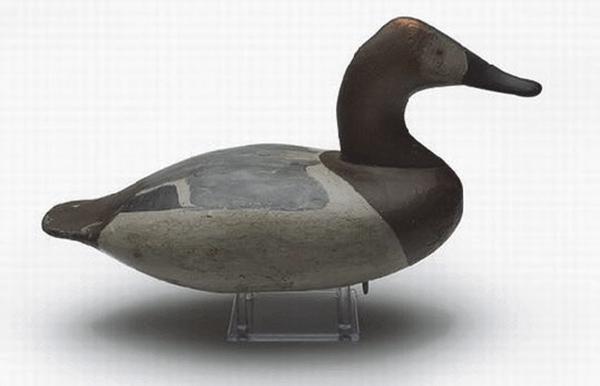