Born William Yeatman Heverin in August of 1860 at Greenbank Farm, he was the first of five children of Mary E. Carter and William H. Heverin (1837-1921); the other four were Sarah C., born in 1865; Perry Barnes, born in 1869; Mary Margaret "Maude," born in 1871; and John Theodore, born in 1874. Will Heverin's two brothers, Perry and John, were commercial fishermen like their older brother.

In 1880, Will Heverin was working as a farmhand at George Washington Barnes' Farm at Greenbank. Will was the grandson of the elder Mr. Barnes' first wife, Sarah Jane Morgan Heverin, who had died in 1857. By about 1885, he began working as a carpenter in the Barnes' old carpenter shop at Carpenter's Point with his relative and childhood friend, George W. "Wash" Barnes. Joined by Scott Jackson, the three men became fast friends, and by his twenty-second birthday, Will Heverin and Scott Jackson were making decoys along with Wash Barnes for use in the Perry K. Barnes gunning rig. Until about this point, Perry K. Barnes had been purchasing decoys from John B. Graham.

On March 30, 1892, Mr. Heverin married Annie Ellen Lamar (1868-1950). Ms. Lamar was from Charlestown, the daughter of William Thomas Lamar and Mary Jane Johnson. The Heverins had three children: Edith (1893-1919), Harry T. (1897-1979), and Ernest Y. (1902-1976). Harry Heverin joined his father in the commercial fisheries and Ernest worked as a lineman for Pennsylvania Telephone Company and later as a leadburner for the E. I. du Pont Company. The Heverins' daughter, Edith, married Raymond Reynolds of North East, Maryland, but died at the young age of twenty-seven years in 1919 during a flu epidemic, leaving one child, Raymond Reynolds (1916-1984). Harry T. Heverin married Margaret Sanders (1911-2000) in about 1933. They had one child, David L. Heverin. Ernest Yeatman Heverin and Elizabeth Burton (1902-1989) were married in 1933 and had one child, Katherine Ann Heverin. 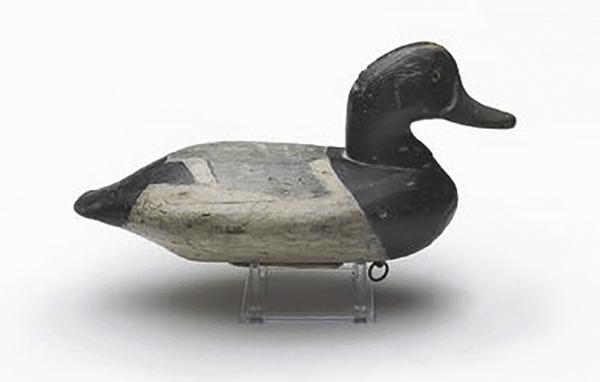 (Above, very early, circa 1890, Blackhead drake in original paint, Will Heverin, Charlestown, Maryland. Probably made at Carpenter's Point.)

By the mid 1890s, having a wife and family, Will Heverin took up residence in Charlestown, living for the majority of his life in the left side of a large brick duplex on Bladen Street, where he paid a monthly rent of fifteen dollars. Although he listed himself as the proprietor of his own commercial fisheries business in the various federal censuses, Will Heverin was a true waterman and was involved in all aspects of life on the North East River. He continued to work at the Barnes Brothers' Fishery at Carpenter's Point for some time, overseeing the laborers post-1905. "Snake" Heverin, as he was called by locals, was also a professional guide and a market hunter, having gunned at night with a punt gun, shipping Canvasbacks via rail to the markets in Baltimore and Philadelphia. 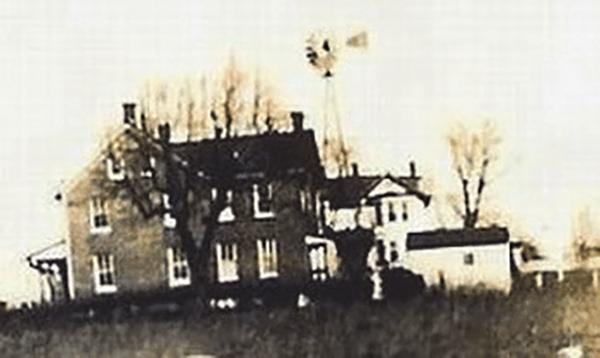 (Above, Will Heverin, circa 1935, courtesy J. Cranford Henry, Charlestown, Maryland, and the Heverin house on Market Street, decoy shed in rear, circa 1905, courtesy of William Algard, Charlestown and George Algard, Principio, Maryland.) 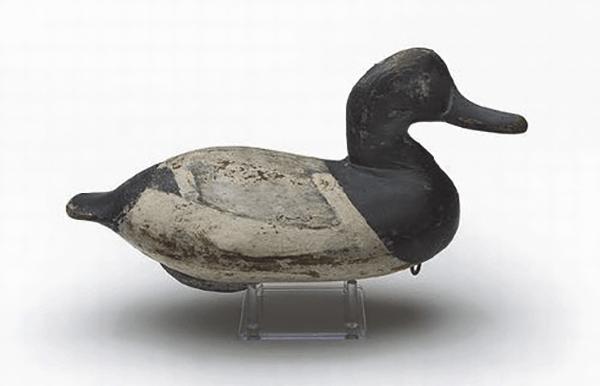 (The next five (5) photographs show Mr. Heverin at work in his decoy shed behind the Bladen Street house, circa 1945, courtesy of Darlene McCall, Charlestown, Maryland.) 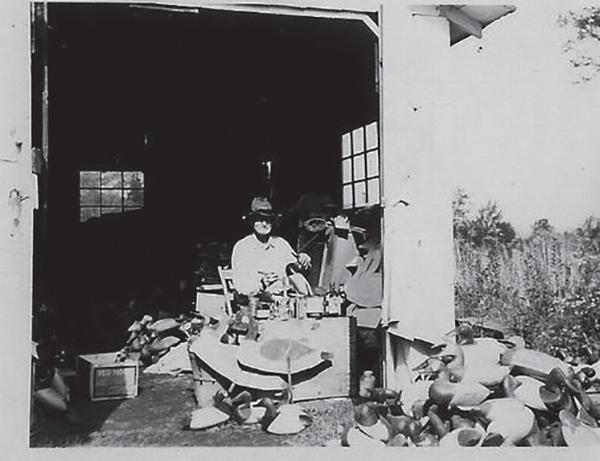 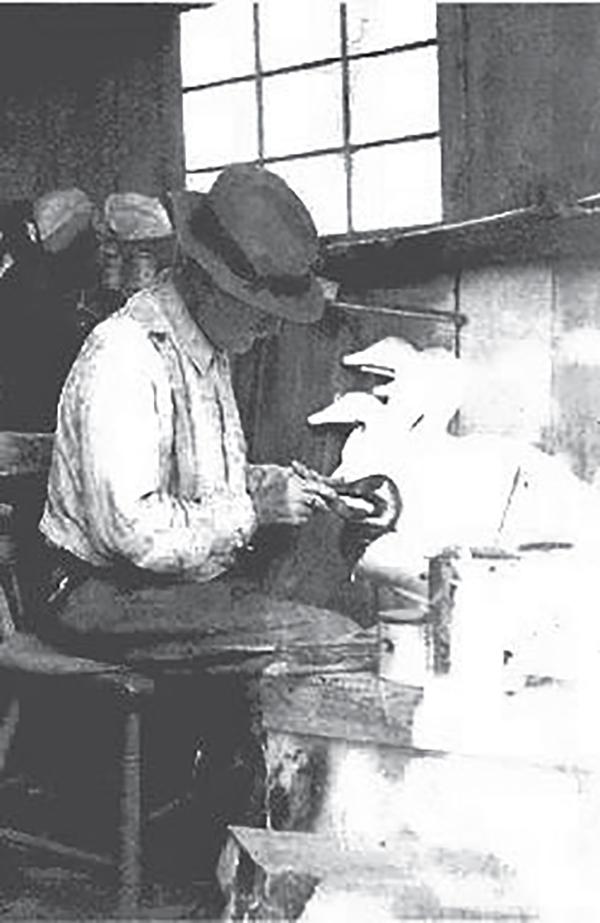 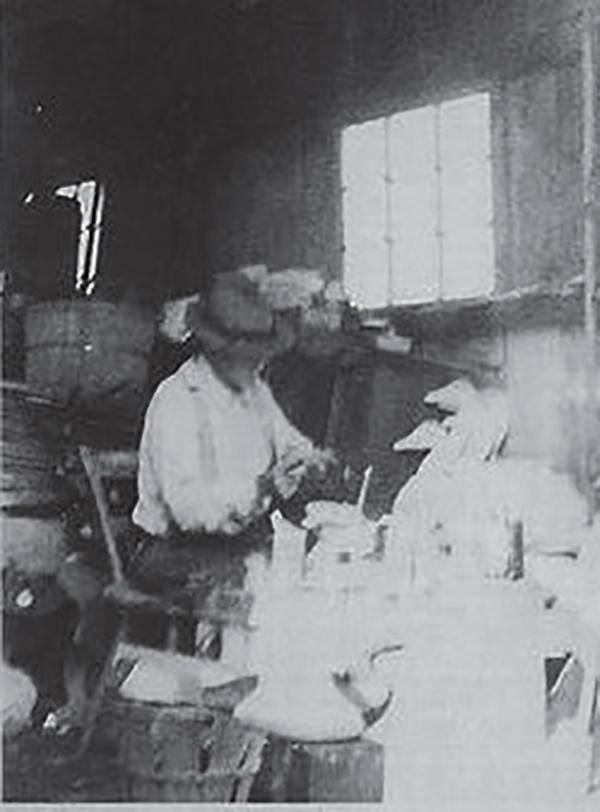 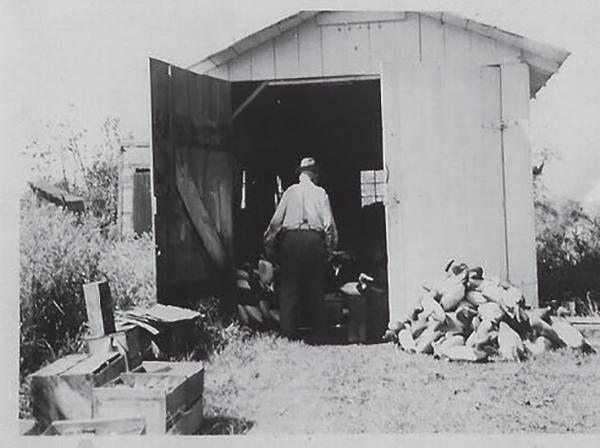 Snake Heverin made mostly Canvasbacks, although he also made Redheads, Blackheads, and Blackducks. He also made wooden wing ducks, and a few iron sinkbox decoys have been attributed to his pattern. There are very few miniatures, as Heverin made these only as gifts for family members. Will Heverin would make decoys from whatever size piece of wood was available. There are some Heverin birds the size of Teal, while some Canvasbacks are the size of small geese.

Will Heverin began by hand-chopping the piece of wood with a hatchet to eight sides. From there, he placed the wood on his decoy horse and used a draw knife, spoke shave, and rasp to shape the bird. Each of his heads were likewise hand carved, using a straight razor. The head was fastened to the body using one long nail driven from the top of the head down into the body and two smaller nails on the front of the neck. All decoys except Blackducks were primed with white lead paint. With the exception of the Canvasback drakes, all Heverin decoys have wing patterns; even his Blackducks have a green wingbar. There are, of course, exceptions to every rule; Heverin would paint a wing pattern on a Canvasback drake if a customer so requested. Regardless of the size or species, all Heverin decoys are sturdy birds with solid rolling bodies. All have the characteristic Cecil County "paddle tail" that drops off from the hump on the back of the bird. It is said that his pre-1925 decoys have a larger hump that those made later. The heads are easily identified by the "smile" where the bill meets the head. 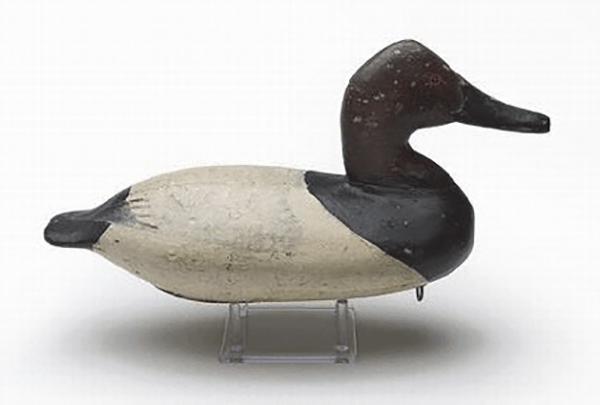 Will Heverin continued to make gunning decoys until about 1945. It was around this time that Nelson H. "Hies" McCall of Charlestown, a forward-thinking decoy collector, convinced Mr. Heverin to allow him to shoot a series of photographs of him at work in his shop directly behind his home on Bladen Street. These photographs are the only known pictures of any of the Charlestown decoys carvers at work. The shop was a large white shed with double doors. Hundreds of decoys in various stages of progress were stored in this shed. The heads were painted first and then the bodies. After painting the birds, Mr. Heverin would lay them out on racks in the sun to dry. It is said that he became so proficient that he could complete fifteen decoys a day. Those last birds in 1945 sold for fifty cents each.

One year after the death of his wife in 1950, Mr. Heverin died in Wilmington, Delaware, and is buried at the Methodist Church in Charlestown.

(Canvasback drake and hen, in original paint, circa 1925, Will Heverin, Charlestown, Maryland.) 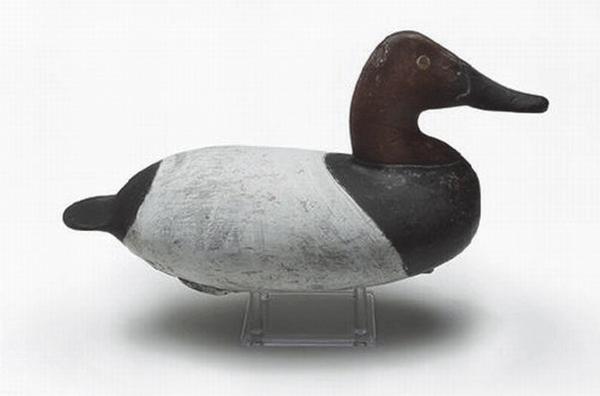 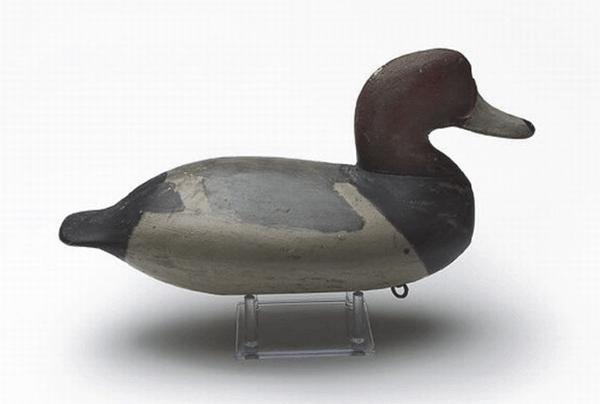 (Redhead drake and hen in original paint, circa 1925, Will Heverin, Charlestown, Maryland.) 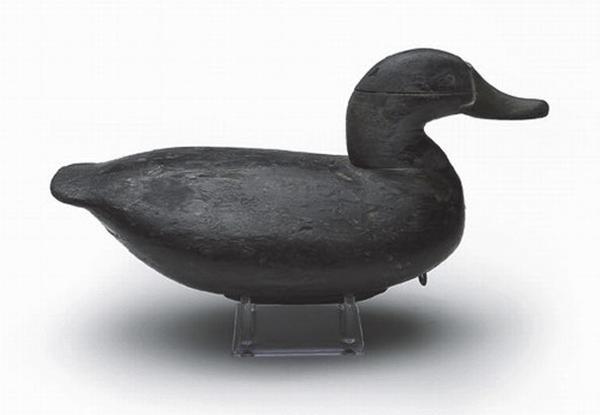 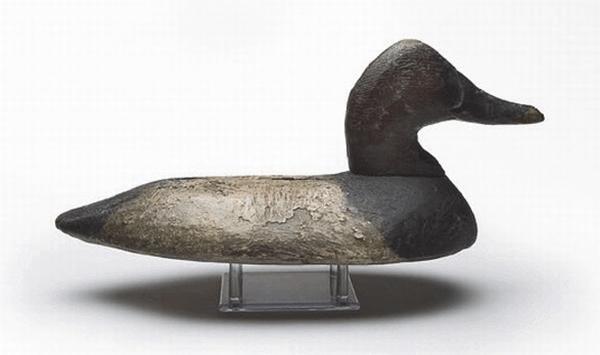